How Do You Say Hypocrite in Spanish? 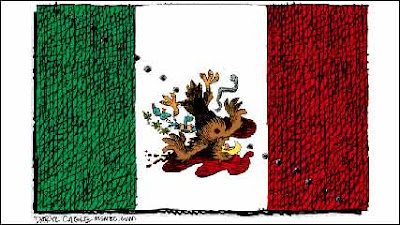 Illegal aliens may come to America and desecrate the American flag but when an American draws a carton of the Mexican flag Mexico becomes outraged.
From AOL

Lauren Frayer ContributorAOL News
(Sept. 4) -- An American cartoonist's rendition of the Mexican flag is causing controversy south of the border, where Mexicans say it's offensive to taint their national symbol with images of drug violence.
Political cartoonist Daryl Cagle's drawing, which ran on the front page of several Mexican newspapers this week, shows what's normally a regal-looking eagle at the center of Mexico's flag riddled with bullets and bleeding. It's a reference to the drug wars that have riled Mexico and left more than 28,000 people dead there in less than four years.
"Editorial cartoonists look for readily recognizable metaphors and that's an obvious one for Mexico," Cagle told CNN.
But some Mexicans say they're offended by the cartoon. Like the American flag, Mexico's banner is a national symbol under which many soldiers and civilians have given their lives. They say Cagle overstepped his creative license in this case.

"It is a shame that a patriotic symbol like our flag, which is so beautiful to me, can be mocked by a stupid cartoonist," one angry reader complained to the Mexican newspaper El Universal. "I think there are many other ways to graphically protest what's happening in our country."
The Mexican Embassy in Washington weighed in on the issue, with a spokesman Ricardo Alday saying Thursday that Mexico "respects and defends freedom of speech and freedom of expression" but "differs" with Cagle "on the use he makes of the Mexican flag and the message it conveys."
In a letter to MSNBC.com, which employs Cagle, Alday said the cartoon "triggered a negative response from some sectors of Mexican public opinion."
On his blog, Cagle acknowledged that many people consider his cartoon "scandalous" and that it "struck a nerve with Mexican readers." He said he's received some "interesting, outraged emails" from readers.
"I think your idea of bringing the violence in Mexico to light is excellent. Too bad you butchered it along with the Mexican Flag," Ramon De Leon wrote on Cagle's blog comments section. "Laws in Mexico with regards to the use and depiction of the flag are in place to prevent this sort of stuff. Please consider taking it down and issuing an apology to the Mexican American community."
Cagle has not yet issued any apology, and newspapers continue to reprint his cartoon despite the controversy. The cartoonist also sought to defend his choice of material as a freedom that comes with his profession.
"National flags are common fodder for editorial cartoonists around the world, so the reaction to this cartoon was surprising to me," Cagle wrote.
The controversy over Cagle's cartoon comes two years after another cartoonist, Barry Blitt, sparked ire over his cover of The New Yorker magazine showing Barack Obama, who was then running for president, and his wife Michelle dressed as Muslim extremists with an American flag burning in a fireplace behind them. And in 2005, a Danish newspaper published controversial cartoons depicting Islam's prophet Muhammad, igniting protests and violence that left hundreds of people dead across the globe.

Images of Mexico have drawn offense before -- and not always from Mexicans.
In 2008, Absolut Vodka launched a marketing campaign in Mexico that showed a map of North America with several states in the Southwest -- including California, Texas and Arizona -- located inside Mexico.
The states were conquered by the U.S. in a war with Mexico in the mid-19th century.
The company pulled the ad after it received more than 1,000 angry comments on its blog site, with many calling for a boycott of the brand.

Absolut issued a statement saying that the ad, which ran in Mexico only, did not "advocate an altering of borders, nor does it lend support to any anti-American sentiment," Reuters reported.
Last year, Burger King ran an ad for its new Texican Whopper burger that showed a tall American cowboy and a short Mexican wrestler, whose cape resembled the country's flag.
The ad, which ran in Europe, showed the cowboy helping the wrestler reach high shelves and clean tall windows.
A narrator described the burger as "the taste of Texas with a little spicy Mexican."
Mexico's ambassador to Spain, Jorge Zermeno, said the ads "improperly use the stereotyped image of a Mexican," according to The Associated Press.
"In Mexico we have a great deal of respect for our flag," Zermeno said.
Bob Haran, Publisher, American Conservative Republican at 11:05 AM